Let food be thy medicine and medicine be thy food Hippocrates

How we got where we are now, from where we started... 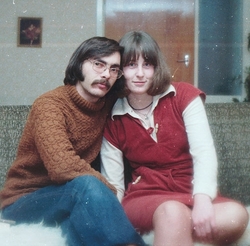 Rather than tell you what age I am - and have to edit this page every year to update it - I will say I was born in 1954. Christine, my wife and partner, was born in 1955.

We have 3 children and 6 grandchildren. None of us have any major health issues. Having said that, Christine had a coronary episode in 2010 and has been on blood pressure drugs and statins to keep her from having another, while I have had knee trouble (from accidental damage) and am due to have it operated on. It should be minor arthroscopic surgery on both knees to repair some meniscal tears. Because of the knee problems I've been using a cart to travel around the golf course for the last year and a half while I've been waiting for surgery.

While I've been unable to walk the golf course, my weight has crept up, from what 3 years ago was about 82-83 kg, to around 89 kg. I have to say that my weight was around 55-60 kg as I entered my 30s, increasing to around 75 kg by the end of my 40s. Similarly, Christine was around 65 kg during her child-bearing years and has climbed to 90kg as of the beginning of this year, 2013. At no time during our life have we lost any weight, it has always been a gradual climb.

That is until now.

Around the beginning of April 2013, I decided to follow my long-time convictions about diet. I had been spurred on by some revelations I had seen on a humorous, compelling documentary by Tom Naughton, called Fathead.  I had always, unashamedly, eaten things like cream and red meat, while cooking in lard or dripping or butter - because it tasted nice! After all, that is what I was brought up on through the '50s, '60s and '70s - and my weight didn't start to get out of control until the '80s. Here was a guy that seemed to be supporting the idea that those things were not unhealthy for me. He was telling me that the "low fat" proponents were telling me "bologna"!

So... I started experimenting and researching and got onto the common-sense based approach to food that  I have currently adopted. It is based on the knowledge we have that foods our ancestors ate have kept them healthy for the last two million years, while the last two hundred have seen major changes to our diet and an accompanying rise in poor health indicators. Not only that, the last thirty years have seen attempts to curb the tide and those attempts have served only to accelerate it.

Anyway, based on my new understanding I have chosen to forego certain foods and increase (if necessary certain others). The foods that I have cut out of our diet are sugars (including honey), starches (so no potatoes, rice or pasta), grains, and refined carbohydrates. I have chosen to limit (for now - while going through a weight-loss period), fruits. I can eat unlimited amounts of meats and saturated fats - just what I feel like really. I have come to view polyunsaturated fats like grain oils (e.g. canola), and partially hydrogenated trans fatty acids (margarine), as poisons to our human metabolism and I avoid them like the plague. (I never liked them anyway!)

While I will attempt to put links to better explanations over time, in broad terms it works like this:

Humans have evolved to be able to burn fat as our most efficient way of producing energy. Getting this fat from animals is our preferred way to do it. The vital nutrients we need for the chemical processes in our bodies are most bio-available from meat. To a lesser extent we can get some of these nutrients from fruit and vegetables, (but this raises complications about the protective mechanisms plants have that can poison us and the fact that the form the nutrients take that make them less able to be absorbed efficiently by our digestive systems). Suffice it to say that if the industrial world collapsed tomorrow, meat eaters would continue to survive while vegetarians (particularly vegans) would struggle and likely die.

When we have fat as our main source of sustenance our blood sugar remains relatively stable and we don't suffer fluctuations in our energy levels. This has served us well in curbing our appetite until the next animal happens along that we can eat. We can go for hours and perhaps days without food.

Eating fruits will send our blood sugar up, and the body's response is to produce insulin so that the "fat-burning" mode can be turned off while it burns sugar for energy. If we have more sugar than we can use immediately then the insulin tells the cells in our body to store the excess as fat (which we can burn later).

If we just keep eating carbohydrates, we keep storing fat and burning sugar for energy. We never switch back into "fat-burning" mode and we end up going through short cycles of feeling hungry (when the body runs out of sugar) and satisfying it again with more carbs.

What Christine and I have been doing is staying more or less in the "fat-burning" phase. This has allowed us to lose 8kg and 10kg respectively over the first 5 months of this diet. That is without feeling hungry and without trying to restrict our calories. Also we haven't had to take up any exercise. (An incidental feature of this eating regimen, however, has been that we've had more available energy and have voluntarily started cycling to burn some of it off!)

Much of what mainstream medicine and dietary advice has been over the last 30-40 years has been grounded in bad science, ignorance and corruption. When I've found good links to scientific articles and papers I've tried to include them in these pages. For a very good summary of the myths that abound, here is a good starter...  20 Mainstream Nutrition Myths that Most People Believe (Even though they've been Proven Wrong)

Since April 2015, I decided to try something new and went carnivore, or zero carb - more properly zero plant. At the time of writing, I have been at it for eight months. I'm still alive. Here is a good video summarizing most of the scientific evidence for carnivory being optimum for human health.

Update: January 2019 - just back from Xmas holiday in Christchurch where I had no problem sticking to plant-free eating.
More...
My Facebook groups that I am in for sharing information - come join the community and have a look...