﻿Articles/Lectures Relating to Evolution of Man

​Western lifestyles differ markedly from those of our hunter-gatherer ancestors, and these differences in diet and activity level are often implicated in the global obesity pandemic. However, few physiological data for hunter-gatherer populations are available to test these models of obesity. In this study, we used the doubly-labeled water method to measure total daily energy expenditure (kCal/day) in Hadza hunter-gatherers to test whether foragers expend more energy each day than their Western counterparts. As expected, physical activity level, PAL, was greater among Hadza foragers than among Westerners. Nonetheless, average daily energy expenditure of traditional Hadza foragers was no different than that of Westerners after controlling for body size. The metabolic cost of walking (kcal kg−1 m−1) and resting (kcal kg−1 s−1) were also similar among Hadza and Western groups. The similarity in metabolic rates across a broad range of cultures challenges current models of obesity suggesting that Western lifestyles lead to decreased energy expenditure. We hypothesize that human daily energy expenditure may be an evolved physiological trait largely independent of cultural differences.

​My Review of Catching Fire: How Cooking Made Us Human (Wrangham)
After purchasing the book (because I didn't want to be considered 'close-minded'), and following the author through a tortuous path of tortured logic, I'm beginning to wish I'd simply shut up and refrained from making the comment in the first place, allowing the respective members embroiled in the debate to continue as they liked. However, I'd made the plunge so now I'm following up with my opinion of the book​
Meat in the human diet: An anthropological perspective
Meat-eating was essential for human evolution, says UC Berkeley anthropologist specializing in diet​

​Without meat, said Milton, it's unlikely that proto humans could have secured enough energy and nutrition from the plants available in their African environment at that time to evolve into the active, sociable, intelligent creatures they became. Receding forests would have deprived them of the more nutritious leaves and fruits that forest-dwelling primates survive on, said Milton.

The Fossil-Record Evidence About Human Diet​

Stone tools and fossil bones--the latter commonly displaying distinctive cut-marks produced when a carcass is dismembered and stripped of edible flesh with a sharp-edged stone flake--are found together on many Plio-Pleistocene archaeological sites, convincing proof that by at least 2.0 to 2.5 Ma [million years ago] before present (BP) these early hominids did in fact eat meat (Bunn 1986; Isaac and Crader 1981). In contrast, plant remains are absent or exceedingly rare on these ancient sites and their role in early hominid diet, therefore, can only be guessed on the basis of their known importance in contemporary forager diets, as well as their potential availability in Plio-Pleistocene environments (for example, see Peters et al. (1984); Sept (1984). Thus few today doubt that early hominids ate meat, and most would agree that they probably consumed far more meat than did their primate forebears. Instead, most studies nowadays focus primarily on how that meat was procured; that is, whether early hominids actively hunted animals, particularly large-bodied prey, or scavenged carcasses...I fully concur with the view that meat was a regular and important component of early hominid diet. For this, the archaeological and taphonomic evidence is compelling.

Man the Fat Hunter: The Demise of Homo erectus and the Emergence of a New Hominin Lineage in the Middle Pleistocene (ca. 400 kyr) Levant

Abstract
The worldwide association of H. erectus with elephants is well documented and so is the preference of humans for fat as a source of energy. We show that rather than a matter of preference, H. erectus in the Levant was dependent on both elephants and fat for his survival. The disappearance of elephants from the Levant some 400 kyr ago coincides with the appearance of a new and innovative local cultural complex – the Levantine Acheulo-Yabrudian and, as is evident from teeth recently found in the Acheulo-Yabrudian 400-200 kyr site of Qesem Cave, the replacement of H. erectus by a new hominin. We employ a bio-energetic model to present a hypothesis that the disappearance of the elephants, which created a need to hunt an increased number of smaller and faster animals while maintaining an adequate fat content in the diet, was the evolutionary drive behind the emergence of the lighter, more agile, and cognitively capable hominins. Qesem Cave thus provides a rare opportunity to study the mechanisms that underlie the emergence of our post-erectus ancestors, the fat hunters.

Indian Knoll and Hardin Village - a comparison between hunter gatherers and agriculturalists​
​A Body Sculpted by History: The Hunter-Gatherer

"Overall, the agricultural Hardin Villagers were clearly less healthy than the Indian Knollers, who lived by hunting and gathering." 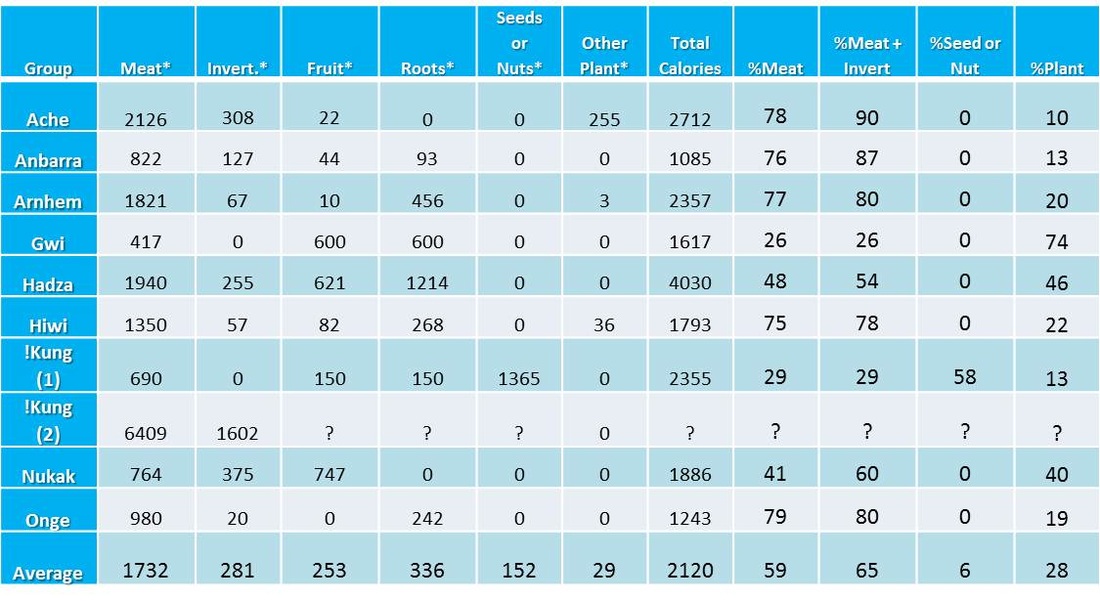 REBUTTAL OF 14 CLAIMS ABOUT METABOLISM, GENETICS, PALEOANTHROPOLOGY & STABLE ISOTOPE ANALYSES IN HARDY ET AL.’S 2015 PAPER “THE IMPORTANCE OF DIETARY CARBOHYDRATE IN HUMAN EVOLUTION”
​When Hardy et al wrote their paper, they got widespread public acclaim from the communities that laud the benefits of carbohydrates (even though, scientifically speaking, there aren't any). Fortunately there are some clever minds out there who could spot the flaws in the paper and they managed to come up with this one.
​Barry Groves Goes Through the Logic of Human Digestive Systems
Also by Barry Groves - written material with references on similar information in the above video - titled Vegetarians Have Smaller Brains
​Ötzi The Ice Man: Agriculture Didn’t Do Him Any Favors
Nora Gedgaudas writes in Primal Body Primal Mind

Agriculture cost us as a species, big time.  We’ve spent the last 500 generations—or less, less than 0.4% of our evolutionary history —after we spent more than 100,000 generations (99.9+%) on a mostly meat and fat diet—eating a diet that is demonstrably and increasingly unnatural to our species.  Pre-agricultural paleolithic hunters and gatherers derived most of their calories from about 100-200 different species of wild animals (meat and fat being as much as 90% of their dietary economy)…and to a lesser degree fibrous vegetables, greens and nuts/fruits.
Suddenly, all of about 17 species of plants today, most of which are entirely new to the human diet—are providing 90 percent of the world’s food supply.  That’s an insanely huge flip-flop, and it has NOT been a healthy one. The toll this has taken upon our health, not to mention the health of the planetary environment is immeasurable and tragic.

​Nonetheless, it is widely accepted that it was, in fact, our extended dependence on the meat and fat of animals (rich in eicosapentaenoic acid, or EPA; and docosahexaenoic acid, or DHA) through these frozen winters of unimaginable duration that allowed for the rapid enlargement and development of the human brain. Meat and especially fat would have been the most coveted and important commodities of all. We never would have survived as a species without them. Our increased dependence on hunting also likely helped facilitate and develop the very human qualities that we most intrinsically value— cunning, cooperation, altruism, sharing, advanced creativity, the power to foresee the future and to be able to call upon the past in terms of the future, the capacity to evaluate with complexity, and the ability to imagine solutions— qualities not particularly found in other primates (Ardrey 1976).

Paleopathology and the Origins of the Paleo Diet - Dr. Mike Eades
​Neanderthals thought like we do
As early as 64,000 years ago Iberian Neanderthals created cave paintings
FEBRUARY 22, 2018
Neanderthals

At least 70,000 years ago Homo sapiens used perforated marine shells and colour pigments. From around 40,000 years ago he created decorative items, jewellery and cave art in Europe. Using Uranium-Thorium dating an international team of researchers co-directed by Dirk Hoffmann of the Max Planck Institute for Evolutionary Anthropology in Leipzig, Germany, now demonstrates that more than 115,000 years ago Neanderthals produced symbolic objects, and that they created cave art more than 20,000 years before modern humans first arrived in Europe. The researchers conclude that our cousins’ cognitive abilities were equivalent to our own.

​Malocclusion and dental crowding arose 12,000 years ago with earliest farmers

"Hunter-gatherers had almost no malocclusion and dental crowding, and the condition first became common among the world's earliest farmers some 12,000 years ago in Southwest Asia, according to findings published today in the journal PLOS ONE."

The Stone Age Diet - Walter L. Voegtlin
Language even gets a bite of the cherry
Humans couldn't pronounce 'f' and 'v' sounds before farming developed

More than 30 years ago, the linguist Charles Hockett noted that speech sounds called labiodentals, such as “f” and “v”, were more common in the languages of societies that ate softer foods. Now a team of researchers led by Damián Blasi at the University of Zurich, Switzerland, has pinpointed how and why this trend arose.
They found that the upper and lower incisors of ancient human adults were aligned, making it hard to produce labiodentals, which are formed by touching the lower lip to the upper teeth. Later, our jaws changed to an overbite structure, making it easier to produce such sounds.
The team showed that this change in bite correlated with the development of agriculture in the Neolithic period. Food became easier to chew at this point, which led to changes in human jaws and teeth: for instance, because it takes less pressure to chew softer, farmed foods, the jawbone doesn’t have to do as much work and so doesn’t grow to be so large.