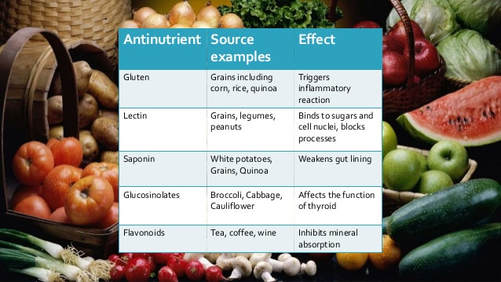 Plants bite back: The surprising, all-natural anti-nutrients and toxins in plant foods
A great primer for learning about the properties of protease inhibitors, phytates, lectins, saponins, oxalates, salicylates and other anti-nutrients present in plant-based foods, with good advice on how to neutralize or minimise damage from these.

​Mother Nature puts anti-nutritional factors and toxins in grains, nuts, seeds and beans for a variety of reasons. Phytates, for example, block seeds from sprouting prematurely. Protease inhibitors, saponins, lectins and phytoestrogens harm insects, animals and other predators that would otherwise eat too many of them. If evolutionary theories are correct, wounded plants produce extra inhibitors and other anti-nutrients to save the plant species. The idea is to cause predators - including plant-eating humans - to experience slowed growth and diminished reproductive ability.1-4 Although it might sound like a "rotten idea," squirrels are smart to bury nuts in the ground, then dig them up and eat them weeks and months later. Similarly, people in traditional cultures all over the world process their grains, nuts, seeds and beans by a process akin to pre-digestion before cooking and eating them.

Determination Of Plant Proteins Via The Kjeldahl Method And Amino Acid Analysis: A Comparative Study

More on Soy from Malaena

All soybean products are hazardous.

Fermentation releases even more of the hormone disruptors, making it even worse.

Go to that "Soy Alert!" page. There are thousands of studies showing negative effects on both animals and humans.

Why Fermented Soy Is Even More Goitrogenic Than Plain Soy

Health Effects of Soy Protein and Isoflavones in Humans
[Impacts of soy products on thyroid and reproductive functions as well as on certain types of carcinogenesis require further study in this context. Overall, existing data are inconsistent or inadequate in supporting most of the suggested health benefits of consuming soy protein or ISF.]
~The more research they do, the more negative soy looks. The soy alert link shows many, many studies.

Milk- and soy-protein ingestion: acute effect on serum uric acid concentration.
[Serum uric acid decreased significantly 3 h after ingestion of lactalbumin and casein but increased after soybean consumption.]
~Want gout? This is how you get gout.
Georgia Ede's Excellent Work on Anti-nutrients from her Website - Diagnosis Diet
On Oxalates
Health Dangers of Oxalates - Kevin Stock
"Many people think spinach is a good source of calcium. But it’s a fraud. The calcium in spinach is completely useless. It’s all tied up in oxalate. And this is true for all high-oxalate foods.In the lab we can measure the calcium content in spinach, but that doesn’t mean it’s available as a nutrient for the body.
​There is a big difference in the nutrition measured in food and the nutrition that the body can actually absorb and use.This is where standard nutrition guidelines fail miserably.
​If we eat 100% of our RDI (recommended daily intake) of calcium from spinach, but 100% of it is tied up in oxalate, we really got 0% of the RDI. Making matters worse, certain foods can increase the amount of a nutrients we need."