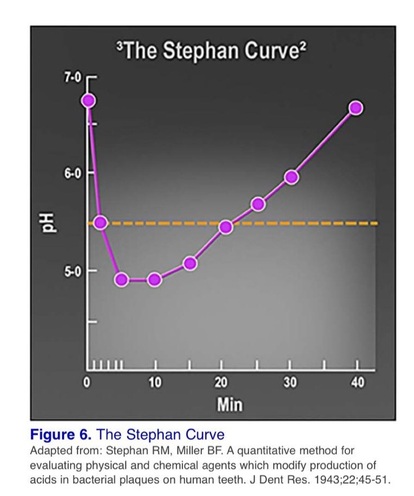 Acidogenic bacteria in dental plaque rapidly metabolize fermentable carbohydrates producing acidic end products. In the mouth, these changes over time in response to a challenge are known as Stephan responses or Stephan curves. The pH of dental plaque under resting conditions (i.e., when no food or drink has been consumed), is fairly constant. Differences do exist, however, between individuals and in different sites within an individual.

The response after exposure of dental plaque to a fermentable carbohydrate is that pH decreases rapidly, reaching a minimum in approximately
5 to 20 minutes. This is followed by a gradual recovery to its starting value, usually over 30 to 60 minutes, although this can be longer in some individuals.
- The following sections discuss some of the mechanisms underlying each stage of the Stephan curve:


# Resting Plaque pH :
This describes plaque that has not been exposed to fermentable carbohydrates for approximately
2 hours and generally has a pH of between 6 and 7. The resting plaque pH value for an individual tends to be stable and may remain so for long periods. One example of an exception is if antibiotics have been taken, which may alter the oral flora. There are relatively high concentrations of (less acidic) acetate compared with (more acidic) lactate in resting plaque, with the amino acids glutamate and proline being predominant. Ammonia, a pH neutralizer, is also present. These metabolic products are present in plaque in much higher concentrations than in saliva, partly because they are constantly produced from the intra- and extracellular metabolism of bacterial carbohydrate stores, as well as from the breakdown of salivary glycoprotein

# Decrease in Plaque pH :
After exposure of dental plaque to fermentable carbohydrates, the pH decreases rapidly. This is due primarily to the production of lactic acid in plaque, with acetic and propionic acids being simultaneously lost from the plaque. The rate at which the pH decreases is due in part to the microbial composition of dental plaque. In general, if more acidogenic, aciduric bacteria is present in plaque, the pH would lower more rapidly.

The rate of pH decrease is also dependent on the speed with which plaque bacteria are able to metabolize the dietary carbohydrate. While sucrose would be metabolized quickly, prompting a more rapid decrease, larger molecules, like starch, would diffuse into plaque more slowly because it would need to be broken down before it can be assimilated by plaque microbes. Another factor that affects the rate of pH decrease is the buffering capacity of unstimulated saliva. The rate at which plaque pH decreases is also influenced by the density of plaque. Less dense plaque can be penetrated more easily by buffering saliva and oxygen causing slower pH decreases than very dense plaque, which cannot be accessed by saliva and oxygen.

# Increase in Plaque pH
The gradual recovery of the plaque pH is influenced by various factors. These include the buffering capacity of saliva, whether fermentable carbohydrate remains in the mouth, the pH value (which may be unfavorable to bacterial enzyme systems) and the diffusion of acids from plaque into saliva or teeth. It is also influenced by base production in plaque. Ammonia from the deamination of amino acids and breakdown of urea in saliva are examples of reactions that contribute to the pH rise. These bases are important to neutralize acid when carbohydrate intake is moderate .The rise in pH may also be assisted by the removal of acids by bacteria .
# Critical pH:
The critical pH is the pH at which saliva and plaque fluid cease to be saturated with calcium and phosphate, thereby permitting the hydroxyapatite in dental enamel to dissolve. It is the highest pH at which there is a net loss
of enamel from the teeth, which is generally accepted to be about 5.5 for enamel.6 The solubility of acid varies with pH but it is also complicated by the fact that teeth are bathed
in saliva, which is constantly replenished and supersaturated with apatite, whose composition varies. By increasing the concentration of calcium and/or phosphate, it is possible to reduce the effective critical pH so that teeth
are able to withstand lower pH values before demineralizing.

- Conclusion:
Understanding how fermentable carbohydrates influence the oral environment, and in turn, caries risk, is key to helping people about effective caries prevention.