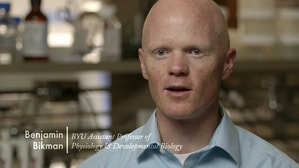 ​Dr. Benjamin Bikman - 'Insulin vs. Glucagon: The relevance of dietary protein'
Low Carb Breck - 2018
The Ketogenic Diet and Its Physiological Effects on the Human Body
(Article by Mercola)

​Story at-a-glance
In this interview, Benjamin Bikman, Ph.D., an obesity and diabetes scientist and associate professor of physiology and developmental biology at Brigham Young University (BYU) in Utah,1 reveals how the ketogenic diet affects your physiology and supports optimal health.Bikman’s conviction that insulin is a key to health and disease prevention, and that controlling carbohydrate intake is the most effective way to control insulin, led him to start practicing what he’d learned. He went on a low-carb diet about eight years ago. “Sure enough, at middle age, it’s helped me stay healthy,” he says.

Most Americans Are Insulin Resistant
Unfortunately, many, including doctors, still do not understand the influence of insulin on health and disease. The late Dr. Joseph Kraft, former chairman of the department of clinical pathology and nuclear medicine at St. Joseph’s Hospital in Chicago, wrote the book “Diabetes Epidemic and You: Should Everyone Be Tested?”

In it, he presents data that suggests 80 percent of Americans are in fact insulin resistant, or have “diabetes in situ.” Based on data from 14,000 patients,2 Kraft developed a powerful predictive test for diabetes.3 He would have the patient drink 75 grams of glucose, and then measure their insulin response over time, at half-hour intervals for up to five hours.

He noticed five distinctive patterns suggesting that a vast majority of people were already diabetic, even though their fasting glucose was normal. Only 20 percent of patients had healthy post-prandial insulin sensitivity and low diabetes risk. According to Kraft, “Those with cardiovascular disease not identified with diabetes … are simply undiagnosed.”

One of the take-home messages here is that insulin resistance and hyperinsulinemia (a condition marked by excess insulin in your blood relative to your level of glucose) are two sides of the same coin, as they drive and promote each other. In other words, if you have hyperinsulinemia, you are essentially insulin resistant and on your way toward developing Type 2 diabetes.

The effects of insulin resistance are really at the heart of most if not all chronic degenerative diseases. Diabetes, heart disease, cancer and Alzheimer’s are just a few of the most obvious ones. The logical conclusion then would be that addressing insulin resistance is a foundational component of effective health care. Bikman says:
How the Ketogenic Diet Improves Insulin Sensitivity
The question then becomes, how do we treat insulin resistance? As Bikman’s research reveals, the ketogenic diet is part and parcel of the “cure” for this condition.
​Bikman says.

The Importance of Cycling High and Low Carbohydrate Intake
For all its benefits though, there are drawbacks to staying in chronic nutritional ketosis. Based on the evidence, I’m convinced one needs to pulse or cycle in and out of nutritional ketosis. Bikman, who is in general agreement with this idea, explains:

Insulin also suppresses the liver’s ability to produce glucose. It impairs gluconeogenesis. What this means is that if your insulin level is too low for too long, your glucose level can start to rise. While this is not universally true for everyone, it can occur, as it did for me. Cycling in and out of ketosis will help you avoid this paradoxical side effect as well. Bikman notes:
The Connection Between Gut Bacteria and Liver Health
Bikman also summarizes how a high-fiber diet helps combat fatty liver disease, which it does by way of influencing your gut microbiome.

Butyric acid (butyrate, a short-chain fatty acid produced by bacteria in your gut) is really similar to the ketone hydroxybutyrate, produced by your liver during the conversion of fat into energy.

The primary difference between the two is that hydroxybutyrate isn’t as absorbable. Most of it is used locally by colonocytes (epithelial cells of your colon). In other words, hydroxybutyrate is used for fuel in your gut, while butyrate benefits your liver.

The Mechanistic Target of Rapamycin — A Driver of Ill Health
The mammalian target of rapamycin (mTOR), also known as the mechanistic target of rapamycin, is an incredibly important pathway, as it controls autophagy — your body’s natural clean-up process in which old, damaged cells are eliminated and replaced with new, healthy ones. As such, it also plays an important role in aging and cancer.

In short, to slow aging and reduce your risk of cancer, you want to inhibit mTOR, as this triggers autophagy. When mTOR is activated, autophagy is deactivated, which prevents the recycling of proteins. Alas, chronic suppression of mTOR is not ideal either. Bikman explains:

The Benefits of Intermittent Fasting
Aside from a ketogenic diet, intermittent fasting — where you do not eat for 16 to 18 hours a day; 12 hours being the absolute minimum — is another effective way to regain your insulin sensitivity and control mTOR.

Basically, while you’re fasting, your insulin will dramatically drop, allowing your body to enter into autophagy and clean itself out. Then, when you refeed, your body deactivates autophagy and starts to rebuild itself.

Dr. Jason Fung, a nephrologist, recently published a case series paper4 on three diabetic patients — all of whom were on high doses of insulin — detailing how intermittent fasting can be used as a therapeutic alternative for Type 2 diabetes.

Of the three patients, two did alternating-day 24-hour fasts, while one fasted for 24 hours three times a week over a period of several months. On nonfasting days, they were allowed both lunch and dinner, but all meals were low in sugar and refined carbohydrates throughout. (The complete manual of the fasting regimen used is described in Fung’s book, “The Complete Guide to Fasting.”5)

The reason you want to avoid eating for 16 to 18 hours is because you cannot effectively deplete the glycogen stores in your liver otherwise. As noted by Bikman, your liver will hold, on average, 100 grams of glycogen, and it takes anywhere between 24 and 48 hours to burn that up.

What this means is that if you’re eating a high-carb diet and want to get into ketosis, you’ll need to totally restrict carbohydrates or fast for at least 24 hours. Once you start running out of glycogen, your ketones will start to rise to take its place as a fuel for your body. Around 48 hours, you’re solidly in ketosis as the glycogen in your liver has been cleared.

On a side note, fasting will also release fat-bound toxins and facilitate detoxification. As noted by Bikman, “as insulin comes down, your urine production starts to increase,” as your kidneys start to flush out toxins.

Industrial Seed Oils — Another Culprit That Drives Disease
The devil’s in the details, of course, and the main problems are caused not only by refined carbohydrates in the Western processed food diet but also by processed seed oils, which Bikman describe as “surprisingly pathogenic.”

Ketones — A Surrogate Marker for Insulin
While measuring insulin is really valuable, you need a doctor’s order to test it. Fortunately, there’s a good surrogate marker for insulin, namely your ketone level, because you cannot have high insulin if you have high ketones. In other words, ketones are an inverse indicator of what your insulin is. (One of the best ketone devices I know of is Keto-Mojo, as the strips are only $1 each.)
When and What to Eat When Exercising
Clearly, your diet is far more important than exercise when it comes to controlling your insulin and overall health. That said, I don’t think you can achieve optimal health unless you integrate exercise. The practical question is, “What and when should you eat when you exercise?” My conclusion is that protein is a necessary component of a post-workout meal, and that it’s best to exercise in a fasted state. Bikman agrees, saying:
The Importance of Leucine Post-Exercise
One of the most important protein sources when you’re exercising is the amino acid leucine. Interestingly, and paradoxically, leucine actually activates autophagy, even though it also activates mTOR, which logically says would result in autophagy being inhibited. This paradox likely has to do with the fact that leucine is ketogenic, meaning it can turn into a ketone, and ketones activate autophagy.

Leucine is so effective for muscle building, research cited by Bikman shows just 5 grams of leucine is enough to maximize muscle protein synthesis in people on an otherwise protein-deficient diet. When it comes to leucine supplements, hydroxymethylbutyrate (HBM) is a breakdown product of leucine that you can take. However, it’s more expensive, and according to Bikman’s reading of the literature, it has no added benefits over leucine itself.
Collagen Does Not Count as a Protein Source
As a general rule, to optimize mTOR, you’ll want to restrict your protein intake to about 0.5 grams of protein per pound of lean body mass (not total body weight), or 1 gram of protein per kilo of lean mass. The elderly may need up to 25 percent more.

When calculating your protein intake, keep in mind you do not need to include collagen in your calculations, as it does not have the full complement of amino acids to be considered a complete protein. Collagen — provided it’s a high-quality, organic grass fed source — is important for the health of your connective tissue, and will help prevent injuries. So, while you don’t want to have excess protein, you almost get a free pass with collagen.