Human beings are omnivores with the ability to eat a wide variety of plants and animals.  For nearly 2 million years, our hunter-gatherer ancestors ate a whole foods diet of animals and plants, in various ratios and combinations, depending on season and geographical location.  Therefore, our bodies are probably well-adapted to a whole foods diet.  A whole foods diet consists of some combination of meat, poultry, and/or seafood, and whole fruits and vegetables (see Paleolithic Diets).  All available scientific evidence strongly supports the notion that a whole foods diet is the healthiest dietary pattern on the planet.
Then, about 5,000 to 10,000 years ago, depending on location, most of our ancestors adopted the practice of agriculture, adding dairy products, grains, and legumes (beans) to their diets.  In evolutionary terms, this is not very long, so many of us have probably not adapted completely to these “newer” foods.  This is probably why dairy and grain intolerance are so common.  These foods are more difficult for us to digest and can even aggravate our immune systems.  Anthropological evidence tells us that our ancestors were healthier before agriculture than after agriculture.  Therefore, avoiding these foods (i.e. Paleolithic Diet) or minimizing these foods, or using traditional processing methods to improve their digestibility and nutritional quality (i.e. traditional diet), may be wise.
Sometime during the late 1800’s, about 150 years ago, refined carbohydrates entered the scene.  Foods like white sugar and refined flours became widely available for the first time.  There are many researchers and food writers who believe that the addition of significant amounts of refined carbohydrates is largely to blame for most “diseases of civilization”—such as diabetes, obesity, and heart disease.  There is plenty of evidence now to support this belief.  There is a growing consensus that these foods should be avoided as much as possible to minimize disease risk.
About 70 years ago food production became industrialized, adding artificial flavors, colors, and preservatives to our food supply.  Industrialization also led to the super-processing of whole foods into unnatural extracts and chemically-altered ingredients.  We do not yet fully understand what the effect of these chemicals has been on our health, but common sense tells us that it would be wise to avoid these as much as possible, even if they are “natural” in origin. 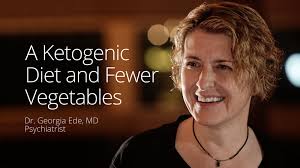 Diagnosis Diet - Her website​
Pages on the different up and downsides of food as well as comparisons of diets
So... a fatty acid goes into a psychiatrist's office...
​Latest Low-Carb Study: All Politics, No Science
Georgia Ede - Posted Sep 05, 2018
"The only evidence to be found in this research is evidence of bias."
What Causes Cancer? Part I