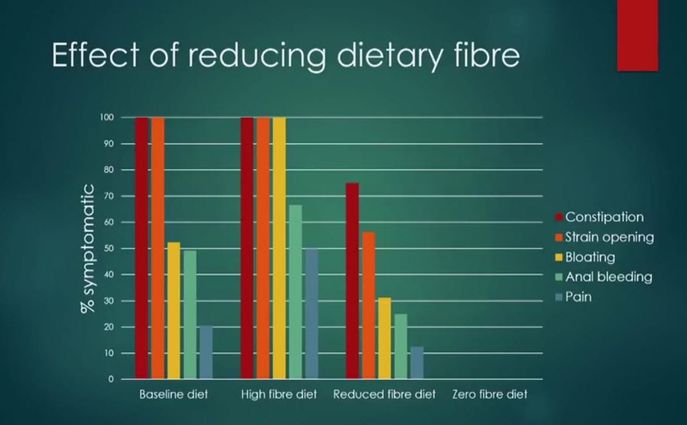 ​AIM: To investigate the effect of reducing dietary fiber on patients with idiopathic constipation.

METHODS: Sixty-three cases of idiopathic constipation presenting between May 2008 and May 2010 were enrolled into the study after colonoscopy excluded an organic cause of the constipation. Patients with previous colon surgery or a medical cause of their constipation were excluded. All patients were given an explanation on the role of fiber in the gastrointestinal tract. They were then asked to go on a no fiber diet for 2 wk. Thereafter, they were asked to reduce the amount of dietary fiber intake to a level that they found acceptable. Dietary fiber intake, symptoms of constipation, difficulty in evacuation of stools, anal bleeding, abdominal bloating or abdominal pain were recorded at 1 and 6 mo.

CONCLUSION: Idiopathic constipation and its associated symptoms can be effectively reduced by stopping or even lowering the intake of dietary fiber.
PULP FICTION: The Truth about Fiber

​The word fiber conjures up wholesome, earthy-crunchy images of squeaky clean intestines and free-flowing coronary arteries. Yet fiber is not a nutrient at all, and is not absorbed by our bodies. What is fiber? What is the difference between soluble and insoluble fiber, is it really healthy for us, and do we even need to eat it?
​WHY IS FIBER SUCH A MENACE TO YOUR HEALTH?

​By Konstantin Monastyrsky
Fiber and Colon Health On A Well-Formulated Ketogenic Diet: New Insights Question Its Role As An Unconditional Requirement
To be specific, we are not challenging fiber’s important role in colon health—along with an optimized microbiome—in the context of a diet whose combined total of carbohydrate and protein is high enough to suppress nutritional ketosis. However, cultural, historical, and now strong biochemical evidence indicates that many of the benefits of fiber fermentation in the colon can be replaced by the normal physiological production of BOHB by the liver during a well-formulated ketogenic diet.