Vitamins K1 and K2: The Emerging Group of Vitamins Required for Human Health
Abstract
Objective. To review the evidence for the use of vitamin K supplementation in clinical conditions such as osteoporosis, vascular calcification, arthritis, cancer, renal calculi, diabetes, and warfarin therapy. Quality of Evidence. PubMed was searched for articles on vitamin K (K1 and K2) along with books and conference proceedings and health conditions listed above. Level I and II evidence supports the use of vitamins K1 and K2 in osteoporosis and Level II evidence supports vitamin K2 in prevention of coronary calcification and cardiovascular disease. Evidence is insufficient for use in diabetes, arthritis, renal calculi, and cancer. Main Message. Vitamin K2 may be a useful adjunct for the treatment of osteoporosis, along with vitamin D and calcium, rivaling bisphosphonate therapy without toxicity. It may also significantly reduce morbidity and mortality in cardiovascular health by reducing vascular calcification. Vitamin K2 appears promising in the areas of diabetes, cancer, and osteoarthritis. Vitamin K use in warfarin therapy is safe and may improve INR control, although a dosage adjustment is required. Conclusion. Vitamin K supplementation may be useful for a number of chronic conditions that are afflicting North Americans as the population ages. Supplementation may be required for bone and cardiovascular health.
Vitamin K2 MK-7: prevention and treatment of arterial calcification

​Vitamin K2 MK-7 regulates the extrahepatic movement and uptake of calcium in the body; or, more simply, K2 regulates the distribution of calcium. MK-7 activates the proteins that incorporate calcium into bones (where it is needed) and activates the proteins that bind calcium to prevent deposits in arteries and smooth muscle walls (where it increases cardiovascular risk factors).

Vitamin K2 is an essential cofactor for the activation of proteins belonging to the Gla-protein family, of which one of the most studied is osteocalcin. Osteocalcin plays a role in the integration of calcium into the bone matrix, a function that defines vitamin K2 as essential to bone health.
​
Vitamin K2 MK-7 is also essential for the activation of matrix Gla-protein (MGP).6 After MGP is activated (in a carboxylation process initiated by vitamin K2), MGP binds free-floating calcium to prevent it from being deposited in vascular smooth muscle cells.7 Without MGP activation, unbound calcium is free for deposit in arteries and vascular smooth muscle walls. In plain language, K2 prevents calcium from being deposited in arteries, making it essential for heart health.
MK-7 vs MK-4

Abstract
Background
Vitamin K2 contributes to bone and cardiovascular health. Therefore, two vitamin K2 homologues, menaquinone-4 (MK-4) and menaquinone-7 (MK-7), have been used as nutrients by the food industry and as nutritional supplements to support bone and cardiovascular health. However, little is known about the bioavailability of nutritional MK-4. To investigate MK-4 and MK-7 bioavailability, nutritional doses were administered to healthy Japanese women.

​Conclusions
We conclude that MK-4 present in food does not contribute to the vitamin K status as measured by serum vitamin K levels. MK-7, however significantly increases serum MK-7 levels and therefore may be of particular importance for extrahepatic tissues.
KeywordsVitamin K2 Menaquinone-4 Menaquinone-7 Bioavailability Absorption

Full article
MK-4 more effective than MK-7 with regard to hip fractures in elderly?​ 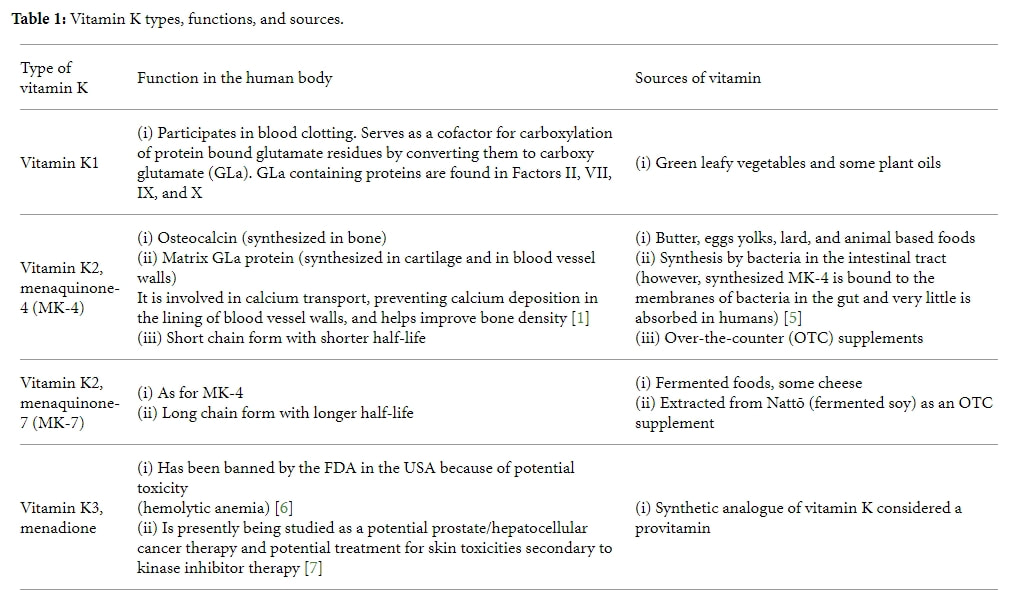 While K1 is preferentially used by the liver to activate blood clotting proteins, K2 is preferentially used by other tissues to deposit calcium in appropriate locations, such as in the bones and teeth, and prevent it from depositing in locations where it does not belong, such as the soft tissues.(Spronk et al., 2003, pp. 531-537) In an acknowledgment of the different roles played by vitamins K1 and K2, the United States Department of Agriculture (USDA) finally determined the vitamin K2 contents of foods in the U.S. diet for the first time in 2006. (Elder, Haytowitz, Howe, Peterson, & Booth, 2006, pp. 436-467)
Another common misconception is that human beings do not need vitamin K2 in their diet, since they have the capacity to convert vitamin K1 to vitamin K2. The amount of vitamin K1 in typical diets is ten times greater than that of vitamin K2, and researchers and physicians have largely dismissed the contribution of K2 to nutritional status as insignificant.
Vitamin K1 and K2—Two Underappreciated Nutrients That Are Crucial for Health
Mercola
Vitamin K
Linus Pauling Institute » Micronutrient Information Center

Vitamin K2 is the only known substance that can stop and reverse soft tissue calcification.

Soft tissue calcification is one of the most serious health problems we face as individuals, as modern societies, and, on a global scale, as a species. Cardiovascular disease—which leads to heart attacks and strokes, and accounts for nearly half of all deaths in industrialised countries—is a disease of soft tissue calcification: the calcification of our arteries.
.
.
.
The short answer is that K2 is found in the fat of pastured animals that graze on fresh green grass, and produced from vitamin K1 by certain kinds of bacteria in their gut.
The longer answer is that vitamin K2 is a family of compounds called menaquinones, ranging from MK-4 to MK-13 depending on their molecular structure.  These compounds are derived from the plant analog, the sister compound, vitamin K1, called phylloquinone, and found in chlorophyll-rich plant foods.  Phylloquinone is consumed by the pastured animal, it makes its way into their intestines, and there it is transformed by the bacteria of the animal’s intestinal flora.  The resulting menaquinone is then stored in the fat cells of the animal as well as in the fat of their milk if they are milk-producing.  Consuming these animal fats in which vitamin K2 has been concentrated will provide this precious essential micronutrient.
If the grazing animal does not feed on green grass, they get no vitamin K1.  If they get no vitamin K1, their gut flora is not only compromised and negatively altered with respect to what it should be if they were consuming the grass they have evolved eating, but it produces no vitamin K2.  If their gut flora produces no vitamin K2, their fat and milk will contain no vitamin K2, and neither their offspring nor any person consuming products derived from the animal will get any vitamin K2.  Hence, no grass feeding, no vitamin K2 in the animal’s fat.
The menaquinone (vitamin K2) content of animal products and fermented foods.
​​Matthew Dalby
Liver is often seen suggested as a source of vitamin K2 and beef liver in particular has been recommended as a good dietary source. From the tables below it seems that while the beef liver tested contains mk-4, it is not a particularly good source. However, most studies have not tested for long-chain menaquinones, mk-6 to mk-13, which are produced by the bacterial fermentation in the stomachs of cattle and provide them with a readily absorbable source of vitamin K2. When absorbed from the gut these reach the liver first where they appear to remain. This can be seen as very little long chain menaquinones were detected in any of the other meat or organs of cattle. The only small study that has tested for these found quite high levels of menaquinones 11, 12, and 13. I would like to see this confirmed but it does suggest that mk-4 is not the whole story in beef liver. Unfortunately, the total amount of vitamin K2 and the various menaquinones in beef liver is uncertain, as only lone small study has measured these.
​The health benefits of vitamin K

The correct understanding is that vitamin K, through a chemical step called carboxylation, REGULATES and balances the coagulation system as a whole. Keep in mind that the coagulation system stands ready to CLOT if you are hemorrhaging to death, but it must also PREVENT THE CLOT if there are no lacerations or bleeding points. The eight proteins counter-regulate one another in this balancing act. Vitamin K is needed for this amazing feat.
Carboxylation of osteocalcin is another regulation feat of vitamin K which keeps bones properly mineralized with a strong protein matrix. Activated osteocalcin also stimulates adiponectin, a potent fat metabolism stimulator which helps people maintain normal weight. It is believed that all the antibiotics used in animal feed lots these days are finding their way into consumer’s guts where the beneficial bacteria that convert vitamin K into its active form are being badly disrupted. (Hence, low vitamin K in the body may be a contributing factor in the modern obesity epidemic!)
Activation of the vascular GMP protein is crucial in preventing calcification of coronary and carotid arteries. This explains the 50+% reduction in heart disease in regular vitamin K users. This same protein may also prevent bone spurs. Vitamin K is thus helping us age better with “hard bones and soft arteries”…not the other way around.
Finally, like vitamin D3, strong evidence demonstrates vitamin K’s amazing ability to reduce cancer risk. For example, men taking vitamin K2 mk7 (a naturally occurring long acting form of K2) at 45 mcg a day can statistically reduce their risk of prostate cancer by 60%! That is just one of many cancer risks that are reduced significantly by regular K2 ingestion.
As we explore the healing power of higher doses of vitamin D3 at the Riordan Clinic, we have found it prudent to partner the safety and effectiveness of this dynamic duo. For every 5,000–10,000 units of D3 being recommended and tested for, we are recommending 100 mcg of K2 mk7 to be sure and prevent the inappropriate calcification that higher doses of D3 alone could cause.

Understanding the role of vitamin K-dependent proteins in vascular calcification

​So, vitamin D3 has the role of making calcium available but at the same time stimulates the production of MGP in order for the calcium to be available to the bones and not to the soft tissues. But for this, it relies on vitamin K2. This is why vitamin D3 without vitamin K2 leads to calcification: because MGP and BGP remain inactive and incapable of binding to the calcium ions to move them into bones and out of tissues. On the other hand, plenty of vitamin K2 would indeed activate the available MGP, but without enough vitamin D3 there might not be enough MGP to confer proper protection against calcification. This is a perfect example of the complementarity of action and function in essential micronutrients. There are certainly many more, but this one is particularly remarkable.

​The Amazing Teeth and Heart Connection

Vitamin K2 works by allocating calcium stores to various parts of the body. It activates proteins called matrix GLA protein (MGP) that carry calcium where it needs to go.
When you have enough vitamin K2, your body sends most of your calcium to your bones and teeth. When you have low levels of vitamin K2 or you’re taking medication that interrupts vitamin K, calcium ends up in unhealthy levels on undesired body systems, including your cardiovascular system and kidneys.
Studies have found that vitamin K2 activates the matrix GLA protein (MGP), which prevents the buildup of calcium on artery walls. Meaning diets low in vitamin K2 (Western diets high in processed foods) significantly increase risk for heart disease.