My Own Experience with Cramp. (See also my page on Salt)

When I was eating the standard diet that almost everybody has been eating these days, I had plenty of sodium in the likes of bread and processed foods that I was eating. However, when I went low carb, high fat and got rid of the processed foods and later when I quit plants altogether, I noticed that I was suffering more from night cramps in the legs etc. when I stretched. Clearly I was missing something.

My first experiment was with adding salt (sodium chloride) to my drinking water at a rate of 1 tsp to 1 litre of water. When I consumed somewhere between one and two teaspoons of salt a day the cramps disappeared.

Since then I've tried experimenting with upping the magnesium and potassium  I ingest  (in separate experiments) and found that neither of these did anything to stop cramps (in the absence of salt that is). I got up to 2 teaspoons of potassium bicarbonate in my daily diet and found that all it did was increase my average blood pressure from 120/80 to 130/80 in the month I was experimenting with potassium. Since it only caused a negative effect and there was no visible positive, I determined that my potassium intake was probably sufficient on my meat-only, plant-free diet.

I continue to use 1-2 teaspoons of plain table salt in carbonated, chilled water every day and if I don't accidentally drop below 1 teaspoon I have no recurrence of cramps. The bar staff at my golf course have a container of salt behind the bar and they all know to make my drink a plain 'sodium and soda' with a touch of ice. ​
Phinney and Volek said the following in The Art and Science of Low Carb Living 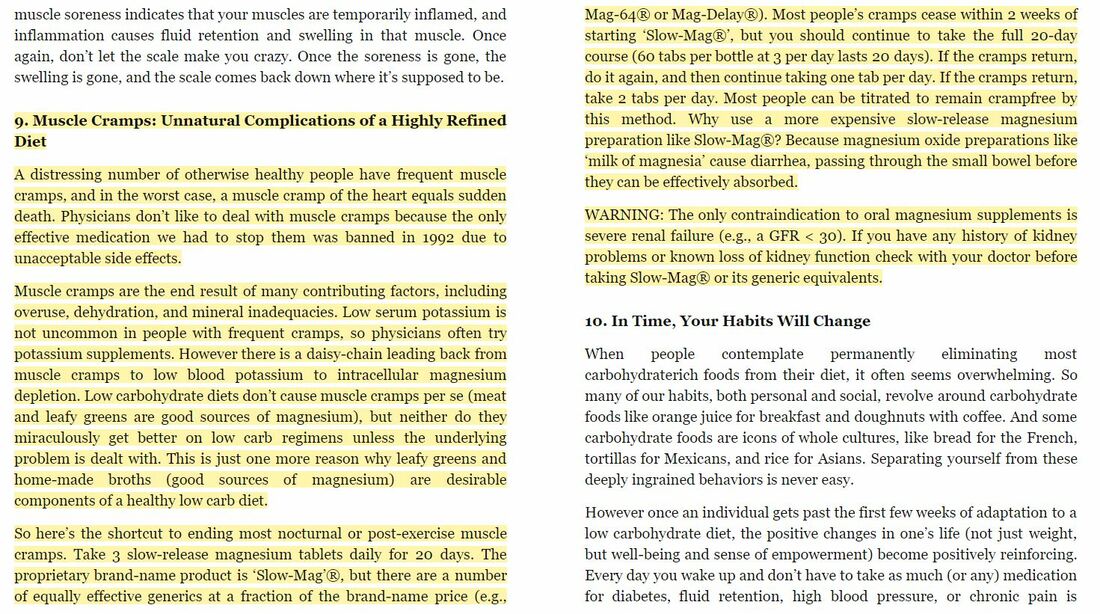